Angampora is the only martial art in the world that refuses to learn or practice martial arts in self-defense. There is a common purpose in this martial art that goes beyond saving one’s life. That is why they take an oath to save their country and nation before mastering the arts.

Kundalini (Divine Serpent Power) is the nucleus of the body

Beyond the development of the physical body

Mental energy, which is available beyond the development of the physical body, is recognized as the nucleus of the anatomy. Anyone has a combined source of energy between the lower abdomen and the spine. They believe that after a good development through meditation, that energy begins to rise along the spine. The senses such as Prabhasvara sense, chronological sense, and kundalini source sense are used to further develop the energy that arises. Approaching such senses aims to develop the mental concentration of the fighter. Proper handling of the Kundalini (Divine Serpent Power) gives the ability to transfer that energy to another person. That is, you can navigate through time here.

You can even see how they die by the power of this Kundalini energy. But it is not advisable to avoid it once it is known. That is their discipline.

Belongs to the oldest Yaksha tribes who lived in Sri Lanka

This Angam martial art which has been passed down from ancient times belongs to the oldest Yaksha tribes who lived in Sri Lanka. The martial art is believed to have been started by nine scatterers at that time, as evidenced by the ancient texts known as the Varnas Purnika and the Pancharakkhavaliya, written on the bark of a gossamer for nearly 30,000 years. Born in this Lak Derana 30,000 years ago today, he led the war on alcoholism and demonstrated the prowess of his learned Sinhala warfare sculpture. This great martial art tradition, later known as Angam (or Angam), was wonderfully learned and practiced by the Rajaraja Mahamatyas of the Sinhala dynasty, who shouldered the great task of passing it on from generation to generation in order to preserve the nation and religion.

Commenced in an era about 40000 years ago

The history of Sri Lanka, it is clear from the complete definition of the word that it was a history of war. It is apparent by studying literary and archaeological evidence. This country which had a monarchy from the popularly approved Manu era is believed by historians that it commenced in an era about 40000 years ago. The Dewa mandala which decided to create a monarchy in the country which was under anarchy sent a message across the country in yaksha tribal language using a drum named the Dawula which is known as the Anda Beraya and heralds a message being conveyed. An individual named Manu who heard this message came from Ruhuna and displayed his skills in Mannar or Mannarama and became a monarch and the name Mannarama was coined due to him, it is said.

In reading it is made clear that by King Manu that there was a methodical and developed art of battle for heroes to use in fighting through standing on a single pillar of a bamboo tree and displaying his artistic battle skills by making arrows fired by 14 fighters fall in a shape of a lotus below the bamboo tree he was standing on, using his talented drills. It is also clear that our ancestors possessed relevant technical knowledge to build ancient weapons such as swords and spears and they methodically studied these and that there was a powerful art of battle which could suppress enemies was in existence. This art of battle which was promoted by excellent kings such as Bali, Tharu, and Ravana was known by different names from period to period and as of today, it is clear that it is known as Angam.

This art of battle spread throughout the country

It is considered that the influence of the religion of Buddhism during the time of Kashyapa Buddha was incorporated into the Angampora technique in the Ravana era. Subsequent to a Commander named Mahasen of Prince Skandha who is considered to be the pioneer of this technique, this art of battle spread throughout the country and later saints who lived then, Pulathisi, Agasthi, Narada, and Kapila arranged to bring about a revival to this art. Among them, the Prophet Agasthi who was a relative of King Ravana practiced this technique of Angampora and perfected it. There are facts to prove it. After King Ravana’s son Indrajith, Indrajith’s two sons Kewesastha and Ravishailaantha practiced and promoted this technique.

The era after the advent of Vijaya

This technique of Angampora which generated unequaled war heroes over several centuries in Sri Lanka, subsequent to the conspiracy that took place during the advent of Vijaya and Kuveni’s period was protected from generation to generation by Yaksha, Naga and Raksha tribalists who were spread far and wide in the country. However, during the inhuman massacres of Indian Innovationists that existed at that time, it ended up in ruins.

Following is what is said about battles Sinhala fighters engaged in with Western Races.

“They were persons who did not get tired easily and nimble and agile as well as an active group. The Dutch proved this by suffering losses. They jumped over each other’s heads and it was amazing to watch their actions of stamina. As known from a reliable source, they had jumped over the heads of three soldiers in the war zone and at once beheaded the enemy whom they had intended to do so and brought it to the Commander in that instance…”

Angampora was used in the Mulleriya battle and the Big Battle in the Ura (pig) well.

“The sword skills of the Sinhalese were displayed for the final time about 5 years after the British took over the country at war arenas only. It is said that a British Captain challenged Galagoda Rate Mahaththaya who was a skilled swordsman for a battle. They met at paddy fields of Lower Hewaheta, Hewawissa. Galagoda clad in a Diyakachchiya entered the battleground with a sword and shield and the Britisher was dressed in a shirt and trouser.

Prior to the commencement of the battle, two lines were drawn to make a cross (x) and said that if Galagoda could stand at the center of the cross and if possible, remove him from where he stood. Although the Britisher’s sword landed like lightning on the sword and shield of Galagoda’s it was impossible to move him. But when his turn arrived, berating the Britisher, he began attacking, and in no time, what was left in the hands of the angered British Captain was just the handle only…”

Then, subsequent to the death of King Rajasinghe, the Portuguese had harassed those of the Angam generations and worried them. They had used various strategies to destroy the Angam fighters since imperialists intimidated the art of battle of the Sinhalese. In a gazette notification issued in 1818, the British took steps to ban Angam battles across Sri Lanka. As a result, Angam training gradually became distanced from the Sinhalese.

The procedure of Suppression of the British was such that in one instance in history the following is mentioned;

“It cannot be said that the damage caused by the rebellion which was held for about a year is so much. More than 10000 Sinhalese died. Although there does not seem to be an exact figure for the British soldiers who died it is said that 114 of the 173 taken to Batticaloa when sick had died. 7000 soldiers who were brought from India also joined the rebellion.”

With the objective of protecting their art of battle in the face of harassment of the white people, fighters decided to add it as a technique of dancing, in the ancient past. Accordingly, they added the basic characteristics of this art of battle and later incorporated them into the Tiger Dance, Bear Dance, Lion Dance as well as the Gajaba Vannama.

Present society began to show interest in learning this art

This not very well-known technique was publicized and awakening was created among present society through the teledramas ‘Dandubasnamaanaya’ and ‘Akala Sandya.’ Due to this, the youth of present society began to show interest in learning this art. Teachers who had learned other arts of battle and battle techniques began to realize the commercial value this had and displayed the Angampora technique to the world and Angampora schools also came into being. Some registered themselves at the Ministry of Sports and the Ministry of Culture as ancestral Angampora artistes.

Even though at first glance there are similarities with the Angampora art of battle just because a sword and a shield are used, a technique cannot be identified as Angampora and it is a dastardly and shameless thing to do. Due to this, it has become near impossible to identify as of today, what the actual art of Angam is. 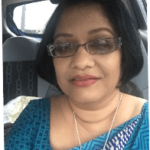 She holds a Diploma in Translations from the Center for Policy Alternatives (Vibhasha Translation Programme). She works as a freelance translator in various fields and is a Sworn Translator in Sri Lanka as well.